Cotlook A index expected to drop by 6.18% by June: TexPro

The index is expected to decline in the short term due to the uncertainty surrounding the US exports to China. The political tension between the two countries may also lead to the Phase One Deal being abandoned. 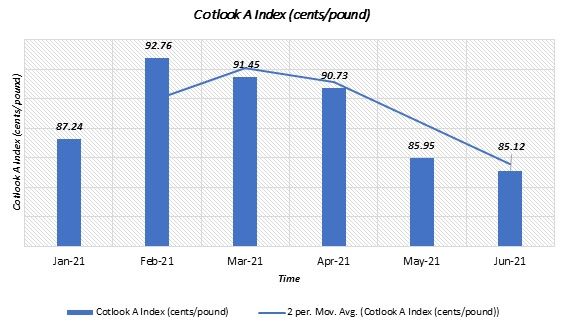 The value of Cotlook A index was 84.6 cents per pound in December 2020 which was the highest last year, according to Fibre2Fashion’s market analysis tool TexPro. Upland offering rates rose in January 2021. This was also supported by upward momentum of New York futures.

The expectations of an additional huge stimulus package promised by the incoming US administration contributed to the optimistic mood of many investors. United States Department of Agriculture’s (USDA) estimate of US production was adjusted sharply downward for a second consecutive month, as per the January 2021 supply and demand report.

The falling production and rising exports also supported the rise of Cotlook A Index in January 2021. The strong mill demands in the physical market consolidated the positive mood of the global cotton market. Inventories of mills diminished with hand-to-mouth buying policy, influenced by pandemic-related uncertainties.

China was a major driving force in international cotton demand, reflecting a continuation of politically inspired buying in compliance with the Phase One Deal. The improvement in the consumption outlook was attributed to higher estimates for India and Turkey.

In March 2021, combined sales commitments of upland and Pima remained high compared to Washington’s forecast for the season. The US’ sales of upland cotton to China were more than double those of the previous season and 25 per cent down for other markets. This surge was significantly attributed to government-inspired purchases in compliance with the Phase One Deal between the US and China.

In April 2021, the index further declined when the US, the EU, the UK and Canada issued joint sanctions on a few Chinese individuals accused of human rights abuse. Due to the ban on Xinjiang cotton, the boycott efforts have been triggered by China against several western apparel companies.

"Backless To The Deep Necks: Malvika Mohanan Has A Versatile Revealing Fashion, Check Out"